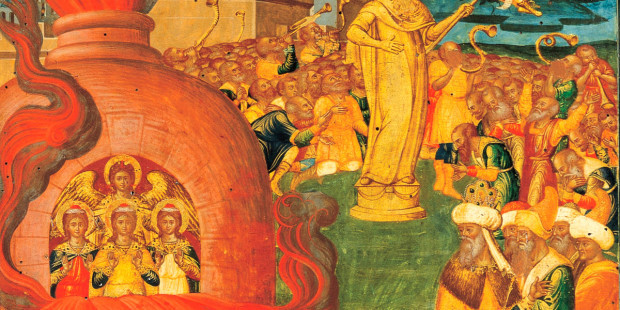 Then King Nebuchadnezzar was astonished and rose up quickly. He said to his counselors, “Was it not three men that we threw bound into the fire?” They answered the king, “True, O king.” 25 He replied, “But I see four men unbound, walking in the middle of the fire, and they are not hurt; and the fourth has the appearance of a god. (Daniel 3:24-25)

The Old Testament has a long history that has been piling up one struggle after another for God’s people. The book of Daniel was written to describe the time when the people were in Exile in Babylon. The Exile is a major theological turning point in the Old Testament. Israel’s image of went through a major transformation – from a private possession for a small but important nation to the one true God who is the only God of all the earth.

In addition, the people began to hunger for redemption and renewal. The tribal conflicts that seemed so important when they had a place, now were diminished in importance once they were all together as a people without a land.

At issue were two big questions: Would Judaism survive the crisis? And would the people ever be returned home and become a nation once again? If the answer to both questions was to be “yes,” then the people would need to have their faith (and their picture) of God renewed.

In the lesson above, we hear a story about three men thrown into a fiery furnace by the Babylonian emperor. Yet the flames do not consume them. To make things even more puzzling, although there were three thrown into the fire, they are accompanied by a fourth who has the “appearance of a god.”

The Exile meant the rise of a radical new concept in theology: that God is with us just as much in hard times and struggles as God is when things are going well. This is critical. Most religions are most likely to reflect the very human instinct that when God is with us things go better than when God is not. But the Jewish insight was that God is with us – period. In this insight was the Jewish hope for restoration. Their Exile was not a sign of God’s abandonment. God was with them, even in Babylon.

This good news is a good reminder to all of us. We may feel abandoned by God in a struggle (even Jesus felt this feeling at the cross). But the feeling is not the truth. The simple truth is that wherever we go and whatever we do, God is always with us. The risen Christ is foreshadowed in the fourth character in the furnace quote above. But we don’t live in the time of foreshadowing. We live post-resurrection and the risen Christ is with us – always.