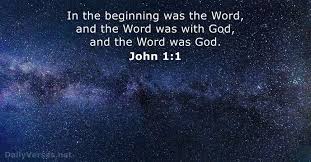 It took a long time to fully come to grips with what had happened to the world when Jesus arrived on the scene. Early attention came in the form of crowds who were amazed at his teaching, his composure and his ability to accomplish seemingly miraculous acts like feeding 5000 people or healing the sick and lame.

Over time, as word spread, it became clear that these events and teachings were from something higher than anyone had encountered before. It was as if there was a direct connection from the mouth of God to Jesus; a direct connection from the hand of God to Jesus. While early followers could not come to consensus about exactly what was happening in Jesus, all were in agreement that something powerful was!

By the time John wrote his gospel, these ideas had started to come together in more organized forms and John’s gospel represents some of the highest thinking about Jesus in the New Testament. He was convinced that meeting Jesus was meeting God. Hearing Jesus was hearing God. In Jesus the creator of the world had come to spend time in creation – amazing!

What John wants to communicate in the verse above is just that. When people are meeting Jesus, this isn’t an encounter with a newcomer. In fact, the God we meet in Jesus was intimately involved in making the world. Ultimately, John will share that the love that compelled God to come to us in Jesus would also compel Jesus to be willing to suffer death on a cross as a sign of just how far God would go and how deep God’s love is.

As we begin Lent, cling to the core truth of the Christian message: God was in Christ. As we get to know Jesus better and learn from him, we will also get to know the God who is both in Jesus and beyond Jesus better as well.