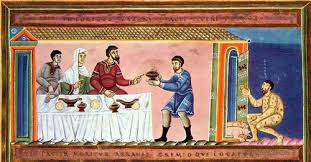 “There was a rich man who was dressed in purple and fine linen and who feasted sumptuously every day. 20 And at his gate lay a poor man named Lazarus, covered with sores,…” (Luke 16:19-20)

In all the parables of the Bible, this is the only story with a character with a name. We have parables about sheep and shepherds, widows and coins, unjust judges, a sower who went out to sow seeds, and many more. But in every story the character is identified by a description and not by a name. The parable for this week is the only exception.

Why does Jesus make this exception? What is there about this story that the poor man needs a name?

We often put people in categories. Well to do people almost always find a way to get the personal attention they need. If need be, they might even be able to pay someone to pay attention to them and know their name. The gardener and the maid always know the name of the rich person where their check comes from. But often the wealthy owner doesn’t know the names of many of the people who provide care for them or their property.

So in this story, Jesus finally does the poor man justice. He was not a category or a label. He was a person. He had hopes and dreams. He had needs. And he had a name” Lazarus.

Each of us would do well to be reminded from time to time. We often categorize people and make assumptions as a result. But each person is not simply a member of a category. Each person has a name and is a unique gift of God made in the image of God.