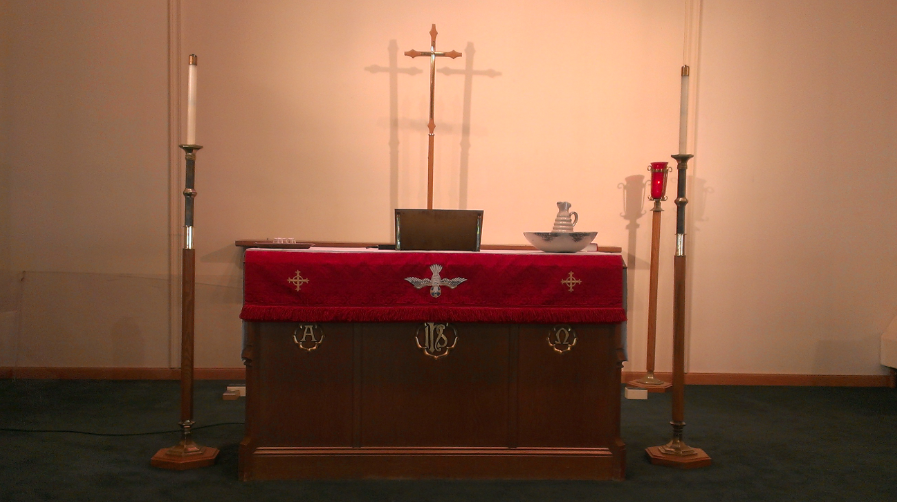 And suddenly from heaven there came a sound like the rush of a violent wind, and it filled the entire house where they were sitting. (Acts 2:2)

Jesus had told them to wait for the Spirit to come. They didn’t know what to expect – they just went where Jesus told them, gathered in someone’s house to pray, and waited for whatever was going to happen. It is probably safe to say that no one knew what was coming and no one expected this! The Spirit’s arrival meant they found themselves no longer in the house but in the streets. They were no longer simply praying together as they waited. They were also out in the public, sharing the good news of Jesus and meeting people they had never met before. The line between “inside” and “outside” had been blurred.

This week we are going to try to blur the lines between inside and outside as a congregation. The early service will be “inside” the sanctuary. We’ll unveil the “old” altar that has been hiding under boards and a tablecloth for over a decade. You can see it in the picture above. The celebration of the Spirit will make the old new again as we seek to improve the ways we pay attention to God in worship.

The late service will be at Wing Park and be “outside.” Then we’ll stay outside and in the midst of the park spend time eating, talking, singing and playing games together. What is often more privately done in the coffee and snacks in the overflow space will be publicly done in the park as we picnic together with people all around us. Who knows what connections we’ll make with our neighbors and how the Spirit will move!

Being outside for the late service will also allow us to remember that the first work of the Spirit happened, not at Pentecost, but millions of years before when the Spirit moved and God spoke and the world was formed. The gift of creation and the beauty of the earth are signs of the Spirit’s work. As we begin to focus on Sacred Living and our relationship with the rest of creation, what better way to begin than with a chance to gather as God’s people outdoors?

See you Sunday – inside and/or outside. Either way, the Spirit will be moving among us and it will bring us life!