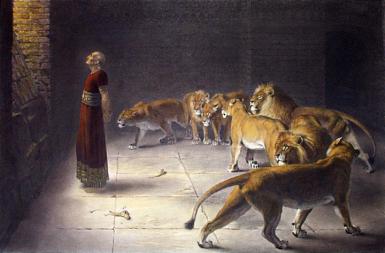 So the king gave the order, and they brought Daniel and threw him into the lions’ den. The king said to Daniel, “May your God, whom you serve continually, rescue you!” Daniel 7:16

This is one of the most famous stories in all of scripture. Daniel has refused to be unfaithful to his faith and values. He has ended up in conflict with the powers of his time. In spite of the costs and the possible loss of his life, Daniel will not back down. He continued to offer his prayers to the God of Israel and Judah in spite of a decree forbidding it. God’s call to him is too important to deny. It would be better to die quickly by the claws of the lions than to die slowly by denying who he is.

So Daniel is thrown into the lion’s den. Even the king is reluctant to do it – he likes Daniel. But Daniel has refused to cooperate with the government decree and the punishment must be given. The king has no choice but to carry the order out.

In our own time, there are many excuses why we don’t share our faith. We can easily blame the media, schools, and other organizations in our time. But the most effective witness has always come, not from organizations, but by people of courage and conviction.

The most convincing witness is YOU. When you believe and live boldly out of the faith God has given you in Jesus Christ, others will notice and word will spread. So Daniel is a model for all people of faith – not sitting by and passively hoping someone else will do what he is called to do – but risking his life to live faithfully and boldly.