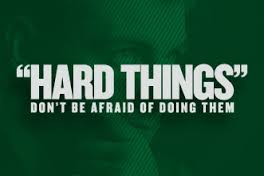 But Ananias answered, “Lord, I have heard from many about this man, how much evil he has done to your saints in Jerusalem;” Acts 9:13

The above quote is from a man named Ananias. He was approached by God to heal another man whose name was Saul. Saul (who most of us know now as Paul) was an oppressor of Christians and a dangerous person. Just before God approaches Ananias, Jesus has appeared to Saul and in the process, Saul has been struck blind. As dangerous as he had been, he is now somewhat helpless without his sight. For Christians, this seemed like a good thing. Saul had been persecuting Christians and now he is blind and helpless. Finally, relief from his dangerous pursuits.

But God has another idea and Saul was part of the work. Healing Saul was important to God – it would allow him to get on with the work God had planned for him. And in order for this work to happen, Ananias has been asked to heal him, to give him back his sight. If you read this whole story (Acts 9:1-19) you’ll see that Ananias gives in to God’s direction and Saul gets his sight back. You’ll also know that Saul (or Paul) goes on to be the great ambassador for Christianity as he starts dozens of churches all around the Mediterranean. God’s desire to heal him and charge him as a missionary was more important than Ananias’ well-founded fears. Ananias gave in and healed Saul; Christianity was blessed as a result.

In your own life there are probably many times when you are resistant to doing God’s will. You may sense what you think it is but also find it difficult, confusing, or maybe even think it is just flat out ridiculous. This lesson is a chance for all of us to reflect on our willingness to listen to God’s guidance, even when it is hard and not what we want to hear. It may just be a chance to be a part of something amazing.