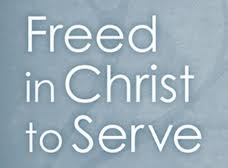 For you were called to freedom, brothers and sisters; only do not use your freedom as an opportunity for self-indulgence, but through love become slaves to one another.  (Galatians 5:13)

As this article is being written we are only a week away from Independence Day and celebrating the freedoms that we share as Americans. For many, the fact that we live in a free country is the highest praise of our nation. For all of us, it is a gift that brings benefits in how we live our lives.

But the freedom we have as citizens of this nation and the freedom Paul announces in the gospel are not exactly the same thing.

For many, the freedom we share means I have the right to do what I want. It is a personal freedom and it actually frees me from any responsibility to others. This approach can mean that people have the right to say mean things, be selfish, etc. and be within their “rights” as citizens of this place. The current controversy about the role of the Confederate flag in encouraging racism as well as being a symbol of hatred is a good example. Free speech laws make it legal to display it. But for many it announces, “We wish the other side had won so we could still own black people.” So, while it may be legal, it is not a loving thing to do.

For one young man in Charleston, SC last week that symbol was his way of announcing that he didn’t like black people. Even when he met them and said, “I almost couldn’t kill them because they were so nice to me,” still the hatred and anger was stronger than the brief experience he had that made him doubt his own motives. Such “freedom” may be legal in our nation but it is not the freedom of which Paul speaks. We are not free to simply do our own thing and not be concerned about how it impacts other people. In this case, the freedom for ideas led to crossing legal lines as well. Nine people, all African Americans, ended up dead.

Contrary to this, Paul says that the freedom we receive from Christ frees us from selfishness and meanness and makes us even more responsible toward the care of our neighbors. We are freed from self-protection so that we can be useful servants for the neighbors God has given us. As a result, we are free to do the things that demonstrate true love and concern for the other.

As a congregation, we believe that God has called us to be “serving gladly as the hands and voice of Jesus.” This means that we are called to the freedom the gospel offers. Freed by the new life that is ours in Jesus Christ, God calls us not to settle for the freedom that humanity offers. As wonderful as it can be, and as helpful as it is, it is just a shadow of the freedom that God offers. In the same book of Galatians Paul says, “It is for freedom that Christ has set you free.” The gift of Christian freedom is at the heart of the gospel. But it is, to quote a phrase, “the gift that keeps on giving.”

When you sense God calling you to serve as the hands and voice of Jesus, first give thanks that you are free to do just that. Then watch for places to serve and words to speak so that others who are burdened, trapped or struggling can be blessed by what you share. Both you and they will discover the deepest freedom – the kind that on God can offer.