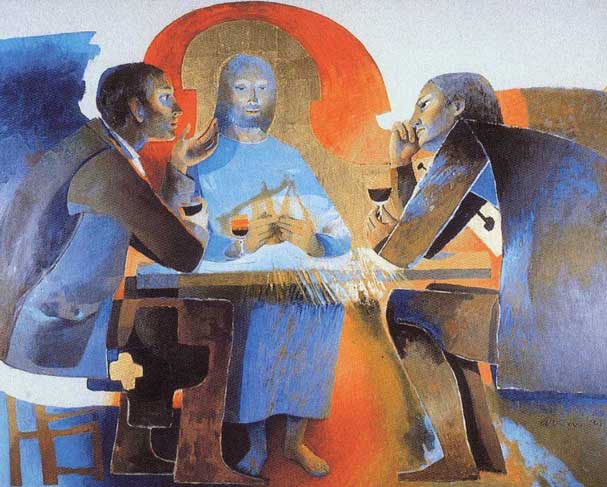 For the next two weeks, we will reflect a bit on communion using John 6.

Not everyone who believes in God believes the same things about God. For example, many of the founding fathers of our country were quite strong believers in God but did not believe God was involved in an ongoing way with the world. These people are from a belief system known as “deism.” Deism believes in God. It believes God made the world and set the ground rules for how life works. But they don’t see God as doing anything on a day-to-day basis. The classic example to explain how deists think is the old wind up style alarm clock. God made the clock, wound it up, and now it is running. The world is the same way – God made the world and get things started but now we are living with the results and God isn’t intervening on what happens.

At the other end of the spectrum are those people who believe that God has a plan for everything and that life is well scripted by God. We hear this viewpoint sometimes when someone dies, especially a younger person. Someone will say, “Well, when it’s your time to go, it is just your time to go.” Some people even claim that they don’t wear seatbelts because they know, “If it’s not my time to go, I’ll be fine.” In this kind of thinking, God is in charge and predestines everything. God’s script for your life and fate are almost the same thing. So fatalism thinks that outcomes are set in stone and we just live out our destiny.

But we also believe that life matters and that God’s involvement always presses towards life in the kingdom of God in ways that include a variety of choices and paths along the way and that human life and the decisions we make are part of the journey toward God’s reign. Not every detail of your life is scripted before you are born.

Because of this, we believe that our relationship with God matters. God has come to us in Christ and opened windows into the mind and heart of God. In the life, death and resurrection of Jesus we see God’s commitment to being fully in the world and God’s willingness to participate in all things fully – even suffering and death. No one, even God, is immune to the struggles along the way. In fact, the gospel message is grounded in God’s promise that life wins and Christ’s demonstration that God will be with us in and through anything, even death itself.

This is why we belong to a tradition known as “sacramental Christianity.” When we gather as a community of faith, we believe that our gathering matters both to us and to God. We believe that when we show up for worship that God shows up too. It is Jesus who stands at the center of our worship and gathering around Jesus in worship is rehearsal for the rest of our week as well. We celebrate Jesus’ presence in bread and cup during worship. But we live in Christ’s presence every minute of every day.