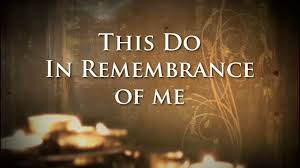 So the priest gave him the holy bread; for there was no bread there except the bread of the Presence, which is removed from before the Lord, to be replaced by hot bread on the day it is taken away. (1 Samuel 21:6)

The above verse is part of a story where King David and his troops are hungry and there is nothing to eat except the bread in the Temple. This bread has been set apart for a particular purpose – it is not viewed like ordinary bread. To just eat it would dishonor the purpose for which it had been set apart. But they are hungry, at the Temple, and this bread is all there is.

Jesus will quote this same story in his ministry centuries later. Oddly enough, things that are set apart for God can be taken back and re-purposed for peoples’ needs if the situation demands. God doesn’t actually need our stuff – Martin Luther emphasized that in his own teaching. So we set it apart, not so God won’t go hungry but as a part of the discipline of remembering God in all that we do.

In this case, David makes the case that his troops need the bread more than God does. The priest at the Temple agrees. They take the bread, set apart for God, and it becomes nourishment for the people of God instead.

In communion, both of these things happen. Bread and cup are set apart and established as vessels of food and drink for God’s purposes. But then, just as God announces that these elements are the body and blood of Jesus and bear the presence of Christ for us, they are taken from the altar and brought to God’s people. It is we and not God who eat and drink. We are nourished and refocused. Christ is with us! Christ who died and rose again is here now!

Oddly, the point of communion is all about Jesus, who manifests his presence among us as the host and focus of communion. But at the same time, Christ devotes himself to nourishing us and making us into the people of God he hopes and promises that we will be. The table brings us close to God and in the mystery, God comes even closer to us.