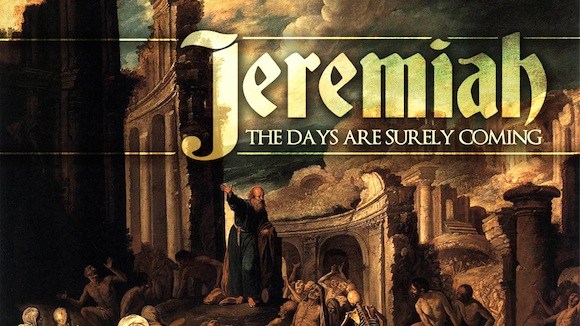 And to this people you shall say: Thus says the Lord: See, I am setting before you the way of life and the way of death. 9 Those who stay in this city shall die by the sword, by famine, and by pestilence; but those who go out and surrender to the Chaldeans who are besieging you shall live and shall have their lives as a prize of war.   (Jeremiah 21:8-9)

Jeremiah is the very bottom of the Old Testament’s sadness. A prophet of struggle who spent much of his time in sackcloth and ashes, his message was the unwelcome news that there was no longer any way out of the mess. Things had gone too far and the die was cast – Jerusalem was going to fall and no amount of maneuvering would change that. Jeremiah’s prophecies, God is still hoping to minimize the damage and keep people alive.

God’s advice? Go surrender. If you stay and fight the scale of the opposition is simply too great. The residents of Jerusalem will easily be crushed and everyone will be killed. But there is a way that keeps people alive and God is in favor of it – go surrender now and live in the land where they take you. That’s better than being wiped out. And as we will see as we move ahead, God will continue to be with people in their captivity in Babylon and the insights gained will be some of the deepest and most mature that the Old Testament produces. What looks like a total loss is actually a doorway to seeing through new eyes.

We often fail to think practically when we find ourselves in a crisis. Overwhelmed by either our circumstances or our principles, we see our options in limited ways and our choices all seem to be death producing, either literally or figuratively. To fight through a seemingly impossible situation seems like the only choice we have and seeing only one bad choice paralyzes us.

As the Old Testament unfolds, the people gradually begin to see God in new and more nuanced ways. God’s anger that points to death, is also mitigated by God’s grace which would prefer for people not to die needlessly. There is a tension between those things that produce death and the natural outcomes of those actions along with the outcomes that God desires which are higher and not always attained through the choices that people make. In other words, God would prefer things to come out differently if only people would cooperate!

This lesson is true for our lives as well. We often engage in something that ends up causing hurt and pain. In some ways, literally or figuratively we become partners with death rather than life. Not every path ends up with a perfect choice that leads to an outcome that we’d like to see. We feel stuck.

But scripture now points us to two paths to always keep in mind. First, don’t ever assume there is only one choice – look for a path that minimizes the loss, even if it isn’t what you’d prefer to do. And second, Jesus’ presence with us on the journey means that there is always and possibility of grace and forgiveness and reconciliation radically altering the choices and the feelings before us. Left to our own, we are stuck simpy being wise. But with Christ, the wisdom and the work of Jesus make options appear that we could never construct alone.