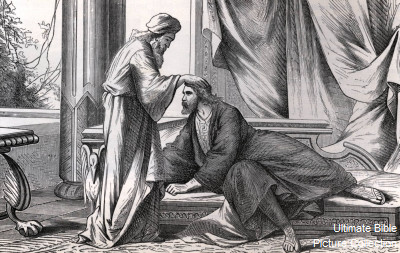 But Ananias answered, “Lord, I have heard from many about this man, how much evil he has done to your saints in Jerusalem; (Acts 9:13)

While many of us know a lot about Saul, who we more commonly refer to as Paul – few of us give Ananias a second thought. Saul, a Jewish leader who wrote as a Christian under his gentile name of Paul, is the prototype for missionary activity and evangelism in the church.

But Ananias has to respond with courage and go against his best judgments in order for Paul to come out from under the blindness of his encounter with Christ, and be able to then move forward and do the work that God has chosen him to do.

Ananias knows that Saul is dangerous. Word of the persecutions that Saul has led is well known. The fact that Saul oversaw the murder of Stephen has been etched in the minds of every active Christian in what is still a relatively small community of people. The last thing that would have crossed Ananias’ mind was that he should do something to help Saul.

But God has a different eye for what we can do and who we can be. Saul’s opposition to Christ is the perfect platform for the transforming power of Jesus to be on display. And when Saul comes to grips with what has happened to him, the persistent, stubborn and driven nature that made him such a dangerous opponent will also be the same characteristics that will make him such a powerful worker to spread the word that God has done something amazing in Jesus.

So, while we all know that Saul/Paul was one of the keys to the early church spreading its wings to many places across the Mediterranean world, the courage of Ananias, who was willing to step back from his instincts and just listen and obey God’s guidance may be just as miraculous.

Each of us have the ability to simply react like usual, or step back from something and ask God, “What would you have me do?” Listening and then acting on God’s call can surprise even us, and the results might just change a life (or even the course of history).