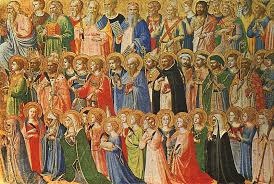 He (King Rehoboam) disregarded the advice that the older men had given him 1and spoke to them according to the advice of the young men, ‘My father made your yoke heavy, but I will add to your yoke; my father disciplined you with whips, but I will discipline you with scorpions.’  (I Kings 12:13-14)

This week is All Saints Sunday. It is a day when we honor the people who have gone before us and imparted their faith, efforts and wisdom on those of us who follow in the paths. While some of these people who have died were young and still in the formative stages of life, many were older and carried much wisdom with them to their graves.

In this week’s text King Rehoboam wants to dominate and control all of Israel with an iron fist. It backfires and instead, it encourages the northern people to leave the united Israel and form a new, smaller Israel in the north. Rehoboam will rule the remainder in the south. Another king (Jeroboam) will rule the north. It is a sort of civil war like our War Between the States in the 1860’s. Where there was one country, there now will be two.

There is a good lesson for all of us who lead in any way. When we use our leadership for selfish gain and to overwhelm people with our authority, it is contrary to how God works and wants us to work. While there may be some short term “win,” the cost and the consequences of such leadership are often counter to God’s will. Instead, good leaders utilize the counsel of those who have demonstrated they have gained wisdom, and use their leadership to unify and strengthen the people of God.

This week is All Saints Sunday. Who are the people who have exhibited leadership in your life and done so in a way to help you grow and succeed as a result?